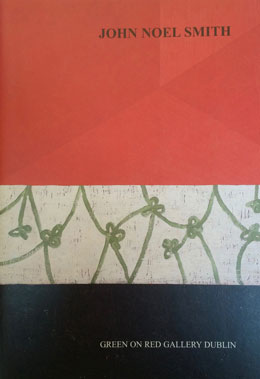 Here, the limits of non-objective painting charge Smith with the task of making paint matter. This repertoire stacks up vertical, horizontal and diagonal motifs as playful as Cimabue’s cruciform, folding and unfolding, pushing and pulling back. Painterly passion pitches against formal constraints: his is an art of desire.

The place of the eye is central to Smith’s art of desire. Like Van Eyck or the wonderfully obsessive Hans Holbein, Smith tests the relations between being and seeing, inside and outside, open and closed.

Paint rushes like wild stallions desperate to be free but corralled by the demands of such a strict repertoire – edges that shout ‘stop!’, swift changes of direction that slow down pace. The edges should frustrate. They are boundaries, disciplines that read simply as the physical limits framing the canvas and deeper down, as metaphors for centuries of tradition about painting and how far it can go.

The context invokes the notion of field, in various ways within and without the visual arts. It whispers of physicist Michael Faraday, who used it to summon up a particular sense of space wider than traditional notions of inside – outside. It speaks of Albert Einstein, whose unique hunch about space and time helped him detect the theory of relativity from the same data used by hundreds of his colleagues.The notion of field invites Pollock and his friends over for a few beers while some Russian constructivists debate transcendentalism in the background. Meanwhile in an imaginary Paris, Maurice Merlau-Ponty sups with Jaques Lacan, analysing the ethics of the gaze. But this is Smith’s field, an intense series of surfaces that invite us to a deeper experience of time and space.